Back to the Travel Blog

Dare You! Where to Eat the World's Most Dangerous Fish

Prepared incorrectly, it’s 1200 times more toxic than cyanide! Yet this fish has been a treasured delicacy for nearly three thousand years - and foodies with a daredevil streak make sure to include it on their list of dishes they must try on a visit to Japan.
Fugu is Japanese for various species of pufferfish or blowfish, as well as dishes prepared from these fish.
Their English names reflect their ability to inflate into the shape of a ball up to three times their original size, with huge amounts of water and sometimes air - all to ward off predators. Some are spiny and have been nicknamed porcupine fish, too.
Neither spines nor shape-shifting deterred ancient Japanese, who managed to add fugu to the menu. After who knows how much fatal trial and error.
That’s because almost all blowfish contain a toxin that makes them bad tasting and often lethal to fellow fish predators. It’s absolutely deadly to humans – even more poisonous than cyanide! There’s apparently enough poison in one blowfish to kill 30 people. And there are no known antidotes.
Sounds like a plot from a mystery novel rather than a food story, doesn’t it? And for many, the opposite of a culinary temptation.
And yet…
If properly prepared by removing the toxic parts and avoiding contaminating the meat, it’s safe to eat. Today, only specially-licensed chefs who have trained specifically for fugu for three years or more are permitted to prepare the delicacy. 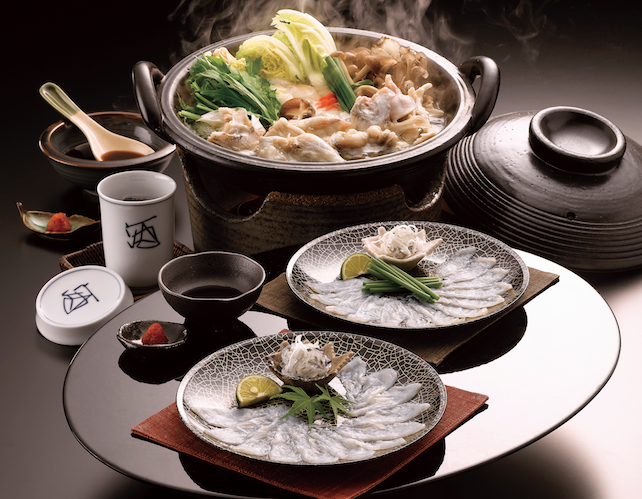 Despite – or perhaps because of! – the risk, fugu is one of the most celebrated, celebratory dishes in Japan, served in paper-thin raw slices as sashimi, or in nabemono (hot pot). As you can imagine, it’s pretty pricey, too.
This is one dish you want to go straight to the source and dine at the places with the very best reputation.

The “Blowfish Capital of Japan”

You can get fugu at restaurants in major cities throughout Japan. But for the ultimate experience of cuisine with a shot of adrenaline on the side, head to the “Blowfish Capital of Japan.”
The city of Shimonosekiis in the stunning southern region of Japan’s main inland, on Japan’s rich Inland Sea. It’s an historic fishing community, and even today, 80% of Japan’s fugu comes from Shimonoseki.
Fugu – and fugu experts – abound. At the Karato Market, you can find a fabulous variety of options and even a stall that sells a special bentō– a colorful boxed meal – that says “good luck!” Or settle in at a table at a local fugu restaurant that offers a more formal fugu experience – that also gives you great photo opps.
One is Heike Chaya- family run for nearly half a century, this restaurant’s menu has a range of creatively prepared blowfish dishes created by highly qualified chefs. The centrepiece here is fugu hot pot.
﻿
Toast and wash it down with some of the famous local sake and celebrate life on the edge!

Start your Culinary Trip and Dare to Eat Some of the Best Food on the Planet!

All rights reserved. You are welcome to share this material from this page, but it may not be copied, re-published, broadcast, rewritten or redistributed.